The Codex Gigas is the world’s largest illuminated manuscript.  The book contains a Latin translation of the bible, medical texts, a history of Bohemia, and several other works.  It appears to be an attempt to place all the knowledge in the world at the time in a single book.  It is a historical and literary feat that was unprecedented at its time.   The book is three feet tall and weighs a hundred and sixty five pounds.  Most historians estimate that if a solitary monk worked for five years and never stopped to eat or drink, he could write only the written words in the Codex Gigas.   That doesn’t include the illustrations or the amazing illustrations.

The book’s story is more than just history, however,  According to legend,  the book was written by a monk who broke his vows.  As a sentence for this unspeakable transgression, he was walled up allive within his monastery in the modern day Czech Republic.   The monk was desperate and pleaded for help.  He offered to write a book containing all the world’s knowledge if he could be freed from his prison. In his desperation, the monk plead with the devil to help him.  The devil answered and gave the monk The Devil’s Bible, otherwise know as the Codex Gigas.  The large painting of the devil on 269 is said to be an homage to the devil. 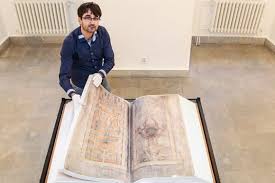 Read More On This At Haunting Darkness