CHILLING footage has shown the “ghost of a soldier” appearing to sit on a bench by a war memorial in the mist.

Locals were shocked to see the eerie video filmed by Josh Newton and friend George Moore, both 21, as they drove through Northam, North Devon.

The pair were on their way to stay with Josh’s family for the week in a rented house when they saw an old war memorial in the town.

But when Josh took his phone out to film the statue on the memorial for those who gave their lives in the World Wars the engineer was left shocked.

Josh said he spotted what appeared to be the “misty figure” of a man sitting on a bench.

But as he tried to look closer, he claims the phantom figure completely vanished. 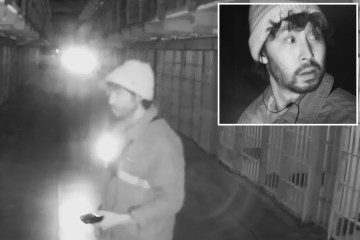 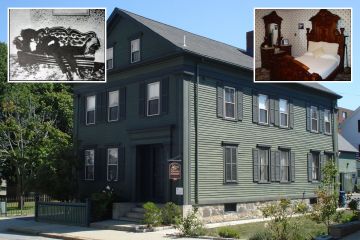 The spooky footage shows clearly shows the outline of a man sat beside the memorial staring straight ahead.

Josh, from Staines-upon-Thames, Surrey, admits he was a paranormal sceptic who didn’t believe in ghosts.

He said: “It looked like a really misty figure. It was clear. It was like someone [was] literally sitting there.

“It was definitely a male figure so it very well could have been the ghost of a soldier.

Most read in The Sun

“As I adjusted my eyes to look a bit closer, it vanished. It was on my left, and then completely gone. It was weird.

“As we went round the corner, it just disappeared. I 100 per cent feel like it was a ghost. It was clear as day to the naked eye.

“I was shocked. I looked and I didn’t know what I saw. And then I looked at the video and I thought no, something was there and now it’s just gone.”

The experience led Josh, who had always been sceptic of any paranormal activity, to admit his perspective had been changed by what he saw.

“I didn’t believe in the paranormal, but I do now. It’s changed my perspective. It’s converted me.”

Immediately after the sighting, the two lads turned the car back around to investigate.

But by the time they returned to the spooky scene, the bench was empty and there wasn’t a soul in sight.

I didn’t believe in the paranormal, but I do now. It’s changed my perspective. It’s converted me

And Josh now claims the video has been a hit with fellow sceptical family members and friends, who swear that the footage is “like nothing they’d seen before”.

Josh said: “There was nobody around, it was just me and George. I’m glad I got it on film, because nobody would have believed me [otherwise].

“My family couldn’t believe it. They said it was like nothing they’d seen before.

“Some of my family are sceptics, some of them believe [in ghosts] and some of them don’t, but it sort of finalised that for them.

“It converted my sceptical families and friends.”

The supernatural clip has shocked users online, racking up almost 300 likes, shares and comments on Facebook.

While a second seemed convinced, saying: “Looks like a ghost to me.”