A ghost hunter says he experienced some “spooky occurrences” during a trip to Carnglaze Caverns.

Tony Ferguson from the New Forest is an avid ghost hunter and has been for 15 years. Tony first became interested in the paranormal during his childhood after having many spooky experiences at his grandfather’s house.

Tony said: “I use to see a man often there which intrigued me as I got older. I wanted to document haunted locations and see if I could prove or disprove my experiences as a child.”

Tony has visited many ‘haunted’ sites all over the UK and has made the journey to Cornwall to visit Carnglaze Caverns just outside of Liskeard.

Also in the news

Nestled in amongst 6.5 acres of ancient oak woodland in the Loveny Valley on the southern edge of Bodmin Moor, Carnglaze is Cornwall’s only slate mine and played a very important role in Cornwall’s mining heritage. Today, it is a venue for tours, weddings and concerts. On the tours, people will venture down 60m below the ground through the three cathedral sized caves where they will find clear blue and green waters. The caverns had been worked for over 500 years by miners who dug out the layers of blue tinged slate to be transported all over Cornwall. 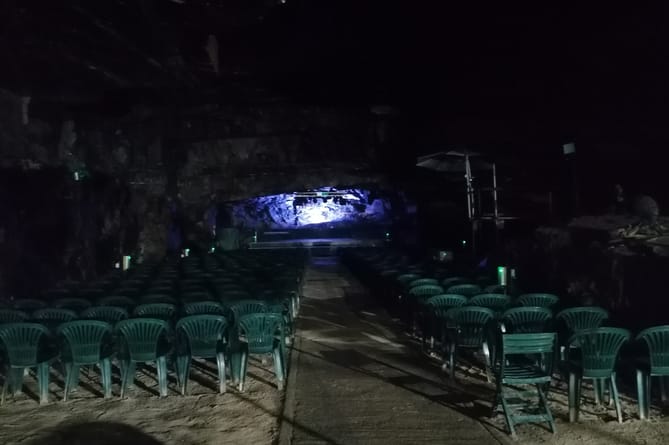 The caverns, once a slate mine, is now used for tours, concerts and weddings ( )

Due to its long history, it is thought that the caves have potential to be a hot spot for the paranormal.

Tony, who’s videos have a large following on social media platform TikTok, ventured down to the caves with his camera to find out.

During the hour spent in the caves a number of spooky events took place.

Tony explained: “I saw a mist shoot towards us and them stop in front of us and just disappear. We then called out around this area for a while and we heard a clear child’s voice say “hello” which came out on camera. Also, later a male said “get out”. This, all in an area which was behind us where it was not possible to gain access.

“Overall we heard so many unexplained noises and even strange anomalies caught in such a small amount of time.

“We tried to look for an explanation for what happened but couldn’t as being very sceptical when doing this I like to look for other explanations. All these experiences have been caught on camera.”

Lisa Perkins, owner, commented: “We have watched Tony’s video with interest, and do remain slightly sceptical about what he believes he saw.

“Personally I would love there to be some kind of presence here at Carnglaze, but as far as we are aware there have never been any spooky encounters. It is pretty cold down there, and that can chill your bones after a while, but in spite of that I think the caverns are pretty benign. The cold air does make your breath a bit steamy…

‘‘Slate was quarried, and later mined here at Carnglaze from the 1600’s through to 1903, and despite the fact that it was worked by both men and boys, some as young as 10, the site had a great safety record, with no deaths ever reported.”

Tony and his team are looking to return to the caves in the summer with another paranormal investigations team called Ghost2Ghost Paranormal Investigations and Paul Cissell where they plan to run a few experiments to see what else they can document.